For my birthday hubby bought me perhaps the best present ever – if you’re a Harry Potter geek that is. And I’m a fully paid up member of the club.

He took me for a tour of the Harry Potter Studios at Leavesden, and it truly was magical. I was arguably more excited than half the children there.

(And in awe of the parents who’d brought babies and toddlers with them and were managing to keep them both in good humour and under control!)

You get to see all of the famous sets, The Burrow, Number 4 Privet Drive, The Great Hall, Malfoy Manor, as well as thousands of props and special effects and even the three-decker Knight Bus – it was all just amazing!

We were particularly taken with the door to the Chamber of Secrets, which they actually designed so all the snakes move to unlock it just as described in the book and seen on camera. Brilliant!

We also returned home with a cushion in Gryffindor colours that says ‘Hogwarts Express, platform 9’ – what do you mean we were conned in the gift shop?!

Now I apologise if most of the above means nothing to you whatsoever, because you are not an ‘HP’ fan, but the point (and there is one I promise) is that there’s nothing like a great book to feed and fuel the imagination.

Whether the later HP books are actually more suited to adults than children is debatable, but the fact they’ve enchanted kids for two decades now says a huge amount about their power.

Mini-me loves to be read to, and to ‘read’ to us, and definitely has her favourite books, even at the age of three. Hopefully this is something that will long continue.

I have very fond memories of reading certain books as a child, and have even been known to flick through some of them in recent years too.

Little Women and the Little House on the Prairie Books had me fascinated with American history from a young age and were an early influence that led to me studying the subject at university.

The Anne of Green Gables books are the reason I’ve always wanted to visit Prince Edward Island, Judy Blume’s particular line in New Jersey-based teen angst was the reason I ended up getting a disastrous perm and my ears pierced, and I Capture the Castle is still one of my favourite novels to this day.

(I also used to curl up by a warm radiator with Enid Blyton’s St Clare’s and Malory Towers books and a packet of ginger nuts, but the least said about that the better!)

But enough bookish rambles down memory lane, here are just a few of the children’s titles mini-me and I like to read and re-read together. And I’d also love to hear any suggestions you might have to add to her little ‘library.’

*Each Peach Pear Plum by Janet and Allan Ahlberg

This is more suited to blue-eyed boy’s age than to mini-me these days, but she still loves to go on the journey of discovery with traditional nursery rhyme characters who end up eating plum pie in the sun together.

*Perky the Pukeko by Michelle Osment

I’d imagine this book is pretty famous in New Zealand where it was written, especially as there’s apparently four in the series, but mini-me loves it because ‘Nanna and Popsie’ brought it back for her from a recent holiday to the land of the Kiwis. Perky is a plucky little bird who overcomes farmyard bullies to find where he belongs.

This is one my own mum used to read to me, and the tale of the slightly dim yet honourable moggy still tugs on the heartstrings. Plus Judith Kerr’s illustrations are just brilliant.

*The Tiger Who Came to Tea by Judith Kerr

Perhaps the author’s most famous book, written when she was living in London. Judith Kerr’s family actually came within hours of being detained by the Nazis after they came to power in Germany in the 1930s. Terrifying to think what might have been and how so many children may have missed out on enjoying her wonderful and iconic books. 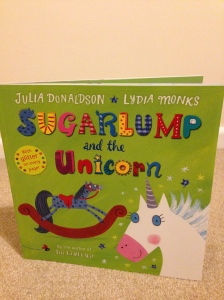 *Sugarlump and the Unicorn by Julia Donaldson and Lydia Monks

Maybe one of Julia Donaldson’s less well known collaborations and a really lovely book about learning to be happy with what you have, with gorgeous illustrations.

*The Queen’s Knickers by Nicholas Allan

A bit like watching an episode of Ben and Holly this one, in the sense that it’s really funny with lots of jokes for adults chucked in too. Mini-me chose to take this to nursery for World Book Day last year.

The only trouble with reading this to pre-schoolers on nights when you are knackered and craving a glass of wine is that it you have to sort of act it out which can be tiring – but also highly amusing! Another classic first published in 1989.